A coworker sent me this blog post featured on The Federalist* titled Having Pets Instead of Kids Should Be Considered a Psychiatric Disorder. In it, the writer G. Shane Morris argues that millennials and their dogs are responsible for the demise of civilized society via substituting pets for babies.

At first, I thought, “This fool can’t be serious.”

One paragraph later I realized “Yeah. This fool is serious.”

I have so many issues with G. Shane Morris’s writing I could probably do a series of posts taking it apart line by line. That seems a bit excessive, so instead, I’m writing one big clap-back.

G. Shane Morris (what does the G stand for???) starts by saying that he’s “convinced that psychology manuals 200 years from now will identify “replacement-baby syndrome” as a diagnosable epidemic in my generation.” In his mind, young adults are using pets as “replacement children.” Like, legit animals replacing children. 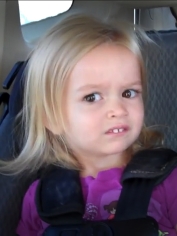 He then launches into retelling a super judgy rendition of a story originally told by a Christian music artist named Nicole Nordeman.

She overheard a couple at the airport holding a FaceTime call with their “baby” and his “grandparents.”

“They are cooing and gushing and exclaiming ‘well look at YOU, big boy! So big! So handsome! Are you being so good for Nana???’” These “parents” pester their own parents with questions about baby’s feeding, pooping, and playtime, and “nearly collapse with joy” when “baby” comes back on screen for a last goodbye. “Mommy and Daddy love you,” the couple squeal. “You are the best boy! We’re coming home so soon!”

Nordeman says she turned around to sneak a look at this sweet baby who’s so beloved by his parents, only to find…a yellow Labrador retriever.

Admittedly, that would be super annoying to listen to. Airport lobbies are for headphones, Cinnabon and trying to sleep in chairs more uncomfortable than those on the plane. Take your loud conversations to Chili’s Too.

If it had been me eavesdropping and I had turned to see a baby but saw a yellow Lab instead, I would have been like “Ha! Fantastic.” But I delight in absurdity. Nicole Nordeman didn’t seem to have a problem with it either.

Morris expands on this anecdote further:

How much embarrassment must it bring those “grandparents” to participate in such a call? How badly must they want real grandchildren, instead of pet-sitting an attention-smothered dog? How much grief must they feel watching their child waste her parental instincts on an animal –  while they’re forced to play along in the couple’s sick and disturbing charade?

Who the hell do you think you are, G. Shane Morris? How dare you place your judgments on these people? You assume the “grandparents” are embarrassed and want grandkids – but you have no idea what their situation is. Maybe this “sick couple” want to have children, but can’t. Perhaps they’re being responsible and waiting to have kids until they’re more financially stable and sound in their own relationship before popping out a baby. Maybe they do have a kid, and she is at Space Camp because she’s a genius and they’re on their way to pick her up. Or, maybe they simply don’t want children. This isn’t The Handmaid’s Tale, and that isn’t a crime.

He later goes on to say “Millennials, it turns out, are twice as likely as baby boomers to buy clothing for their pets.” Let’s unpack that statement to consider why this may be true. Baby Boomers are more likely than Millennials to live in retirement homes. They’re more likely to rely on fixed incomes and to have higher medical expenses. They’re also less likely to have the independence it takes to care for an animal. So while he’d like to dump this stat on Millennials being stupid, he just can’t.

Because it’s easy to crap on Millennials, he also writes this:

In September, the Washington Post reported on findings from research firm Mintel that quantify the replacement-baby epidemic. Young Americans are less likely than their parents to own a car or a home, and half as likely to be married as Americans were 50 years ago.

That is not because we’re spending all our earnings on our pets. This is because my generation is crippled with student loan debt, and for many of us the bottom fell out of the economy right when we graduated college. It’s probably also because women have more rights than they did 50 years ago and can become more than baby producing machines.

Morris does acknowledge the high price of raising children these days, but follows that statement up by suggesting all you gotta do is “buy things used” and have a “spouse willing to stay home and care for the kids.” Because ya know, nobody ever gets sick or struggles with mental illness or lives in a geographically isolated area or has trouble finding a job. And your spouse (read: wife) needs to stop being so selfish and quit her job. Don’t worry about the loss of income, she can find things real cheap on Facebook Marketplace.

He soon returns to his snarky rant on animal lovers by making the following claim:

I can tell everything I need to know about a person by whether he “got a dog,” or “adopted a dog.” … When you go get a dog, you are doing something you want to do. Portraying it as a sacrificial act of virtue is just indulgent.

Ok. “Rescuing” a pet means you got it from a shelter or non-profit agency. The adoption fee you pay covers the costs the shelter endured to care for it and the other animals in its care. “Buying” a pet means you paid a breeder or pet store (hopefully not) for the animal and they made a profit. While terms like “adopt” and “rescue” are marketing devices aimed to pull at your heart strings, their goal is to get you to consider taking in a discarded or unwanted pet before going and buying one.

I would like to argue, G. Shane Morris, that your entire piece is indulgent to your own dislike and jealousy of pet lovers.

He sums up the article reiterating that pets are the thing robbing “us from the joy of children” and that we should all collectively do better. If you think about it, it must be nice to live in a world where pet ownership is the only thing impeding people from having kids. That world must not have diseases, socio-economic disparities, abuse or war.

It’s easy to point at an issue and say that one particular thing you don’t like is the cause. People love to do that. It makes us feel smart and grants us a reprieve from the constant uncertainty that is adulthood. I went to a townhall last week where my county rep blamed high teen pregnancy rates on parents not raising their kids with the right values. You could almost hear the sigh of relief around the whole room of everyone going “Oh! That’s the problem. Now I get it!”

But things aren’t ever that simple. There’s not just one solvable reason that teenagers get pregnant and twenty-somethings don’t start families. People are complicated and so too are the explanations behind their choices, behaviors, and circumstances. Placing the blame on one possible factor is irresponsible.

What do you think? Do you think he has a point? Is he way off base? Leave your thoughts in the comment section, I’d love to hear from you.

*The Federalist is an alt-right propaganda site. Please do not go there for any reason.

4 thoughts on “Having Pets Instead of Kids: A Reaction”

So this is me…

What we’re talking about:

My Life with Ulcerative Colitis
Paleo in PDX

the thoughts i think

aka the ramblings of Candace

A little about everything, a lot about nothing.

New site and new design coming soon! Check out previous articles until then.